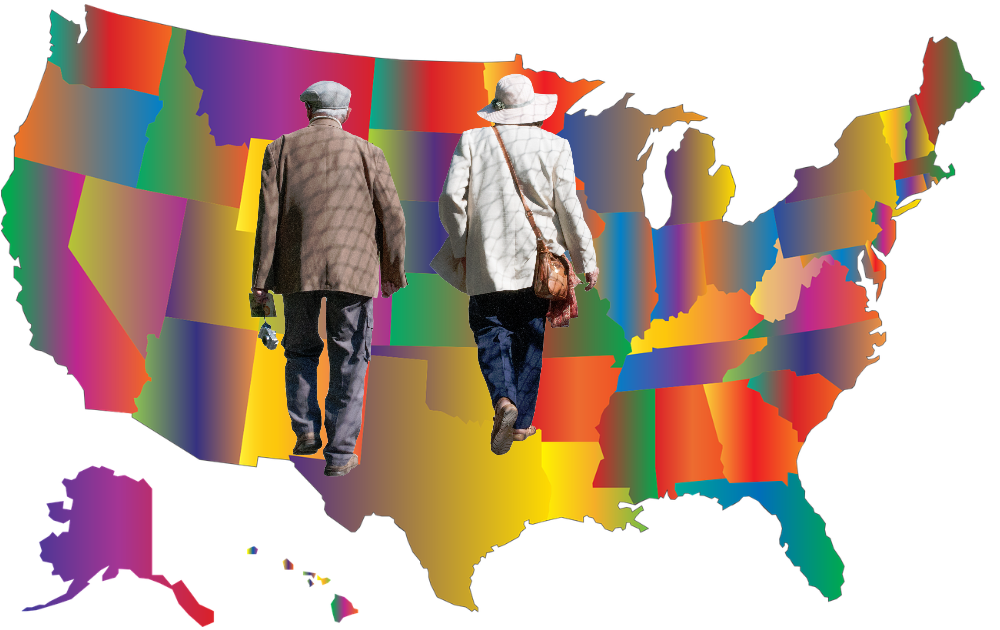 In recent posts I lamented the inevitable truth that aging is not for sissies. Like most of us in my age group, when I was younger I did not pay much attention to any news or commentary about aging in America. It simply wasn’t relevant to my life.

I knew the boomer generation was rising up like a thundering horde ready to imprint its values and issues on America, but that seemed so distant... so irrelevant. We tend to be quite myopic in our self-centered youth.

But then... funny thing... years passed as if they were months... memories compressed into dramatic highlights and lowlights... and, before I seemingly could catch my breath... I’m approaching my 78th birthday. Say what?! Life’s clock never stops for anyone.

Aging in America – the statistics

I hate statistics. They’re so cold and impersonal. But any exploration of the current state of aging in America cannot ignore these statistics...

• We’re becoming more racially and ethnically diverse.  Between 2018 and 2060, the white population’s share of the total older population is projected to decrease from 77% to 55%.

• And economic disparity is widening.  Among adults 65 and older, 17% of Latinos and 19% of African Americans lived in poverty in 2017 – more than twice the rate among older whites (7%).

(Does anyone really think the current racial, economic and power inequities in America that drive our political divisiveness will go away soon? We’ve been on this train for decades in America – with little progress).

The pressures on older Americans, and on our institutions, from this out-of-control train are enormous....

• The number of Americans living with Alzheimer’s is expected to double today’s numbers by 2030.

• Americans are working longer, often because they have to financially, impacting job opportunities for those entering the workforce or seeking advancement.

Covid is changing some projections, but the fundamental trends are still moving in this direction. As a democratic society trying to deal with dramatic differences about what to do and what not to do about all these pressures (and I’ve included here only a sampling), the challenges are enormous – and scary.

Most Americans over 65 worry of course about pressures on Medicare and Social Security, the cost of prescription drugs, home healthcare, nursing home care, the potential for inflation - the rising cost of groceries and, seemingly, everything else – all with decreasing health, energy and financial control to effectively deal with it all.

But, collectively, I think we worry even more about our children, grandchildren and great grandchildren will deal with all this. How will all of these concerning trends affect their ability to live a safe, full and meaningful life? The frustration is that we can often do less to help than we could in our younger years.

This is NOT all doom and gloom, however. We each get to focus on what we want to focus on in our life. Sometimes our focus is powerfully pulled in directions we don’t want. Serious illness, financial setbacks and other disappointments, family relationship issues – there are hundreds of challenges to the life we want. But we still get a choice every day where we decide to direct our focus.

I’ve decided to focus on something else. I will never ignore what’s going on in the world... or not keep a close eye on my physical and mental health... or ever veer away from staying engaged.

But I choose to focus on something more profound and important to me... living an ageless life... not defined by or confined by my age... ever-aspiring to live a life of meaning... and be grateful every day that I have what I have (including the love of my extraordinary wife of 56 years, our wonderful children and their families).

So statistics be damned. Whining is for babies. I choose an ever-ageless, forward-focused life for the precious time I’m blessed to have left to live.

And that’s good enough for me. How about you?

Most of these statistics were pulled from these publication/resources: