Below is a very condensed background of our parents’ history.  It is very American.  Hard working, good people who suffered through the Great Depression and a World War… built a life for themselves without a lot of money, but with pure determination to make life better for their children… despondent about becoming frail and dependent in later years. 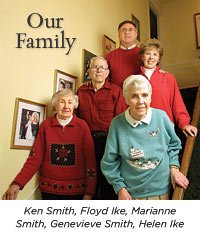 This is, above all, a story of pride and commitment to parents who sacrificed much to make their children’s life possible.  We dedicate EverAgeless.com to parents we admire and love… and hope you find some nuggets of comfort, wisdom and inspiration in these pages. 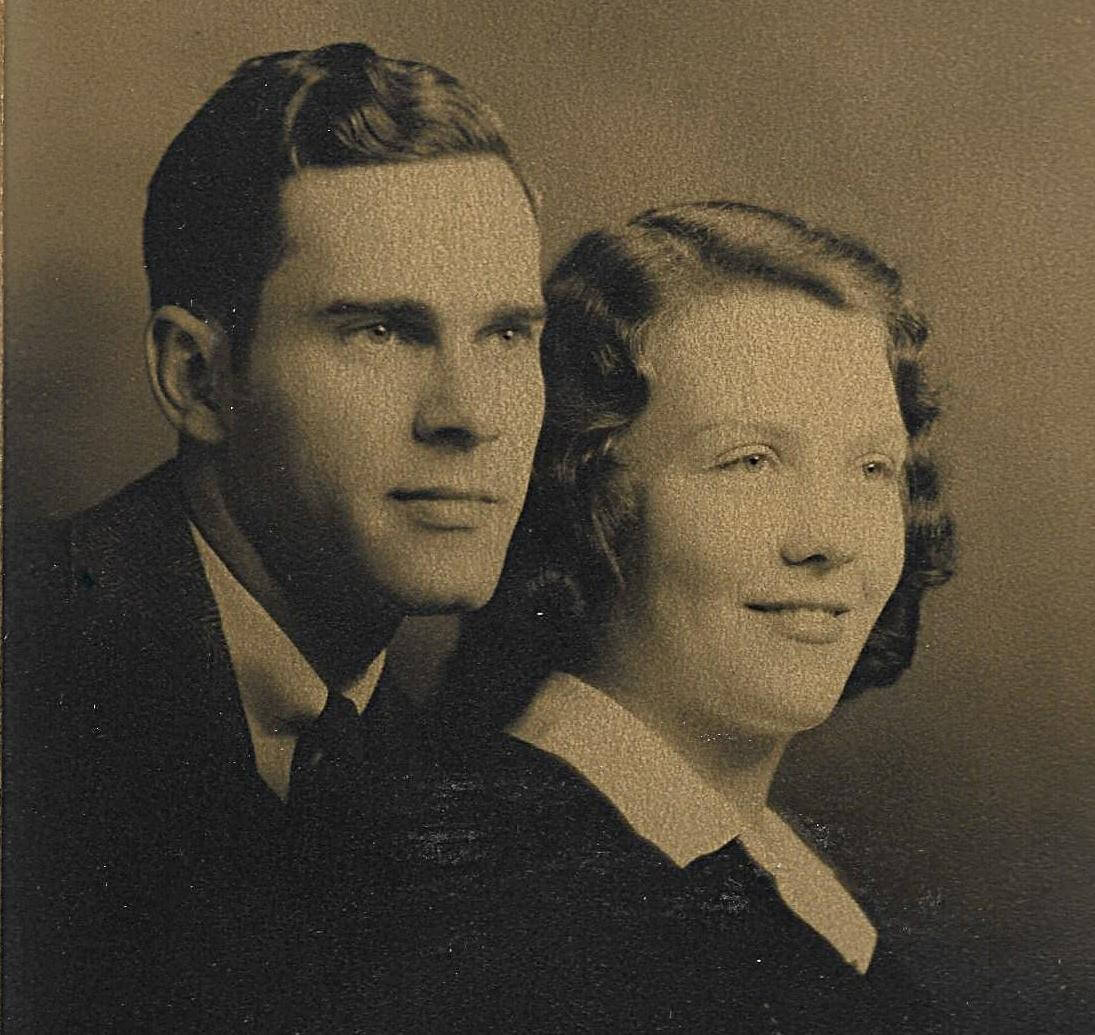 Marianne's mother, Helen Gulick, was born April 2, 1922, on a farm in eastern Pennsylvania and her father, Floyd Ike was born March 23, 1923 in eastern Pennsylvania.  They met on a blind date and started seeing one another shortly after that.  Her mother had just started college at the time, and her dad was out of school and working.

They were dating when the Japanese bombed Pearl Harbor.  They were married April 18, 1942. Shortly after they were married, my father signed up with the Coast Guard.  After he signed up, the Coast Guard sent him to school in Long Island, NY. He was assigned to duty in the Caribbean for a total of 3 years.   Sounds exotic, but the reality is that one of his primary jobs was servicing buoys in the sea lanes with submarines continually prowling – at night – in a tiny boat – by himself – without a life jacket – and he didn’t know how to swim!  Marianne was born during the war – in 1943 and her mom cared for her alone for the first couple years of her life. 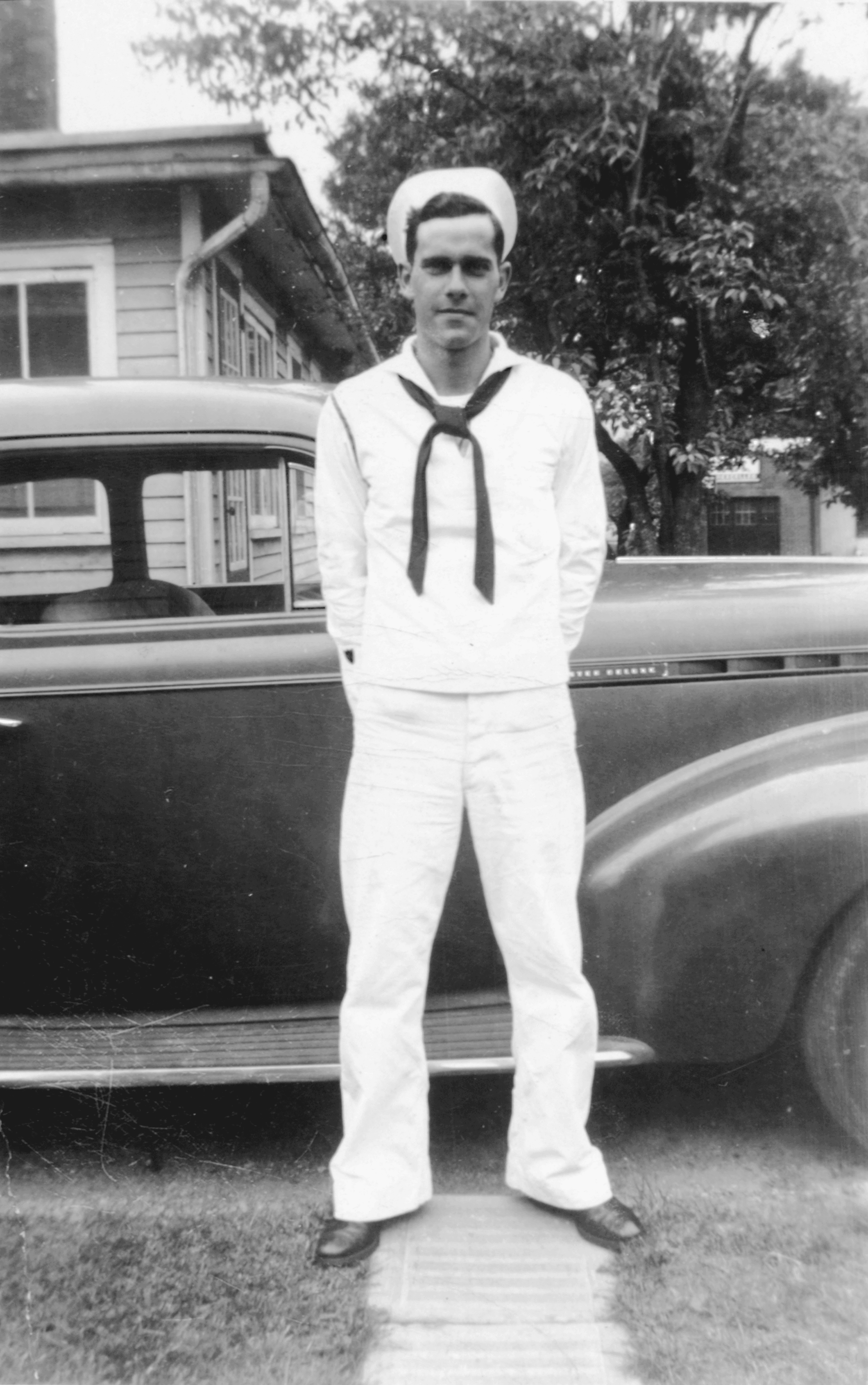 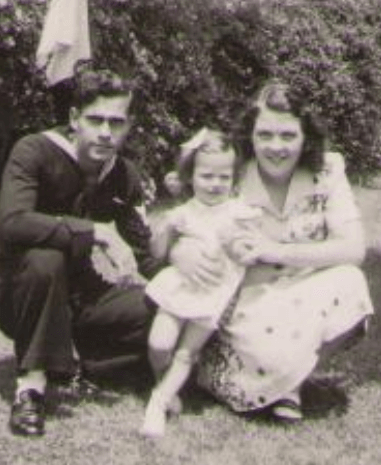 After her father returned from the war, they were able to resume a normal family life.  Her dad was a mechanic – a very good one.  They lived all their married life in her mother’s family home - for 58 years.   Then the property became too much for them.
They had to take care of about 2 acres of land…including mowing, etc.  Her mother’s back was gradually getting so bad that she couldn’t help her dad with the outside work anymore, so they decided it was time to look for a smaller property. They moved into a 55+ community in 2000.   They really loved the community and the people where they lived.  After living there for 3 years, her mother started going down hill with her back and ability to do the normal day-to-day things around the house.  So, we started to talk about them moving to South Jersey to be closer to us. 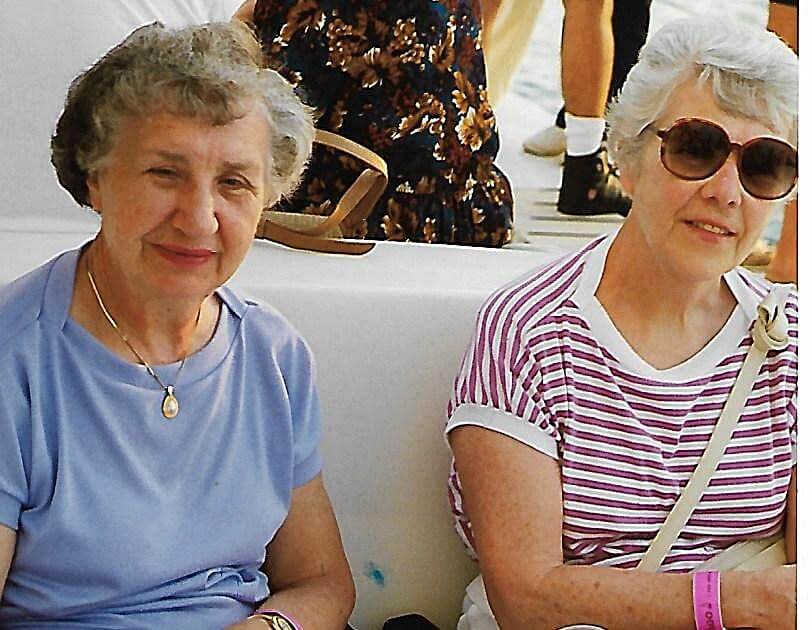 We have a nice 55+ community near us.  We checked it out and picked out a nice home and lot for them to move to in about six months.  They even put a deposit on the home.  But, Marianne's mother’s back got worse and she was not able to do too much for herself anymore and  it was pretty hard for her dad to do everything… cooking, etc.

So, the more we discussed the situation, Marianne's parents felt they would not be able to be by themselves any longer.  So we decided to bring them into our home in 2003, and built an addition onto our home so they could have their own apartment.  In doing so, we also brought Ken's mother as well.  She lived all alone and it was not good for her to be in Pennsylvania all by herself.

Ken’s mother, Jean, was born August 21, 1921 in a coal mining town in Pennsylvania and his father, Paul, was born July 8, 1917 in eastern Pennsylvania. Ken’s mom had a very hard life growing up, and meeting his dad was a critical breakaway opportunity from that life. 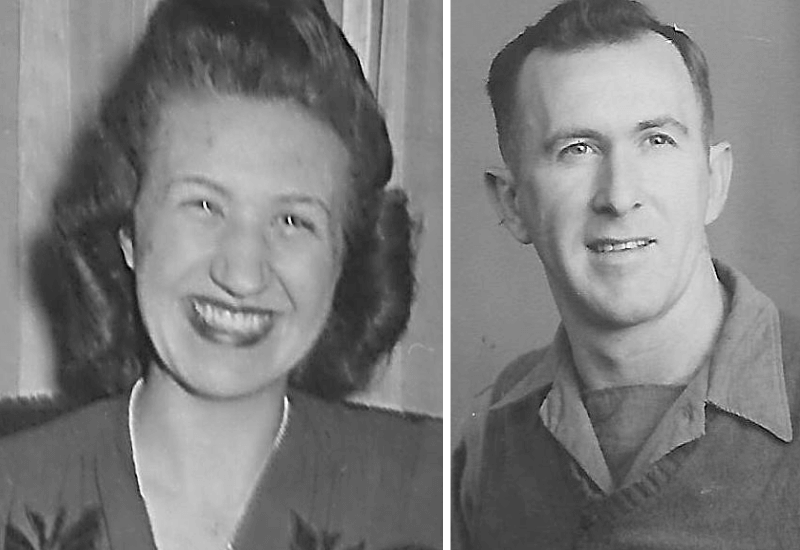 They met each other at a skating rink and began dating regularly.  They loved to go out dancing.  Early in World War II, Ken’s father enlisted in the Army and they married. Ken’s mom followed his dad to Oklahoma during his training sharing the experience with the wives of other servicemen who did the same.  It was her first time ever away from home. 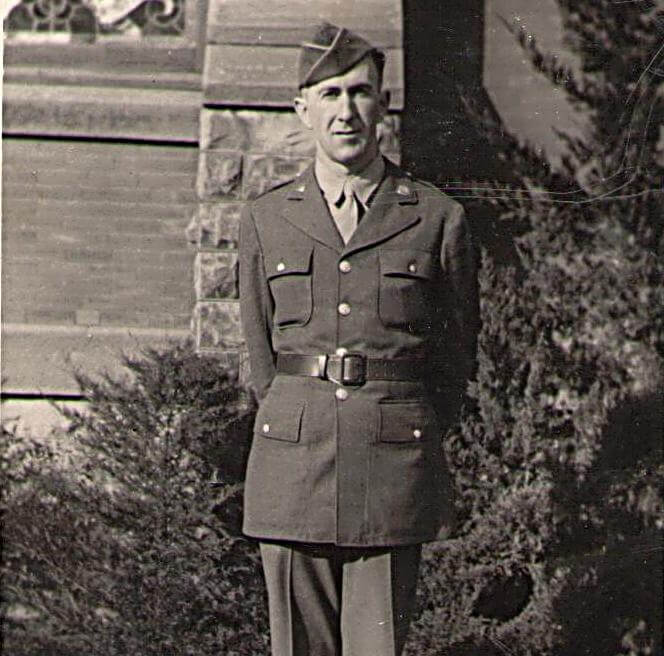 Paul was shipped overseas for about 3 years in the infantry.  He must have seen some very bad stuff, because Ken said his father never once would talk about his war experiences.  It was really a tough time for everyone.

Ken was born in 1943, so Ken’s mom raised him alone until the war was over. After the war they lived with Jean’s (that’s what everyone called her) in-laws for the first few years of their married life. 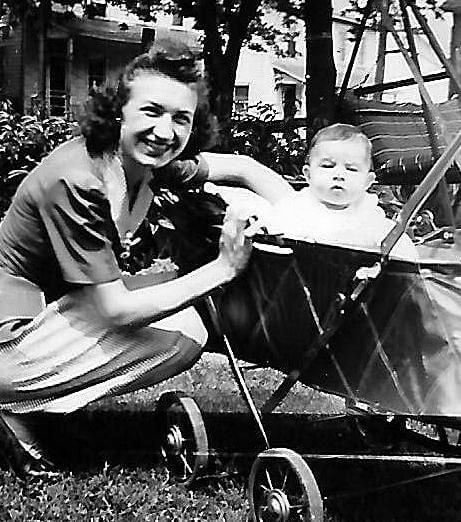 Ken’s father and grandfather built a new house by hand on the lot next to the house they were living in.  Ken’s parents lived the rest of their married lives in that house. All their memories were in that house.

The nightmare of catastrophic illness 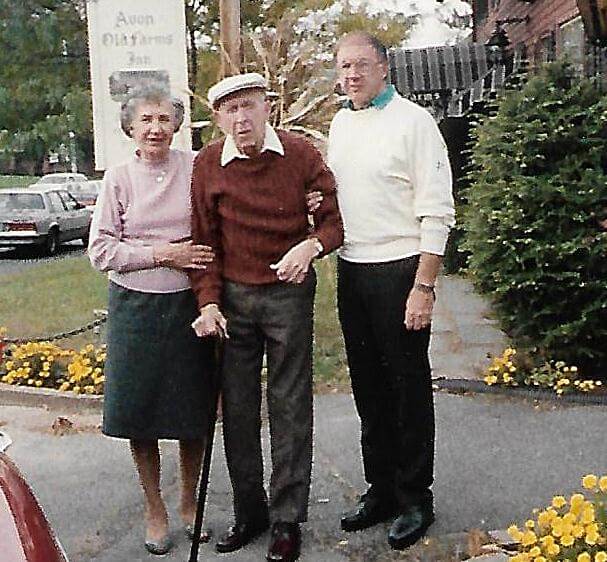 Paul was struck with an aortic aneurysm, colon cancer and a stroke within a short period of time in 1978.  During the next 10 years, Ken's mother took care of him with silent devotion and fortitude that was absolutely heroic.  He could hardly speak and needed constant care.  She never left his side for 10 years.  Incredible!

Eventually, he had to go into the hospital.  That’s when our education on long term care began.  We started the agonizing process of searching not just for information, but for answers, advice we could trust, solutions.  We were so frustrated how fragmented the information was and how little authoritative advice was available – hence the motivation for this Elder Care Diary, and now EverAgeless.com.

Each transition was traumatic

Ken’s father was eventually transferred to a nursing home where, after 6 agonizing months, he passed away in 1987.  Ken’s mom lived by herself after that until 2003.  She did everything by herself, including totally taking care of the family home.  She had a very bad hearing disability which was becoming more of an issue all the time.

When Marianne's parents decided it was in their best interest to move to NJ and be closer to us, we decided we could not let Jean stay in Pennsylvania by herself.  Her friends and family were either moving away or passing away.    She also was going to move into her own home at the same 55+ community that my parents were moving into.   When Marianne's parents decided not to live at the 55+ community, we decided she should also move in with us.  We built a separate apartment for her, as well.

Only children – the buck stops here.  The reason we had all three of our parents come live with us is that we’re both only children and they had no where else to go.  At the time, we didn’t realize how hard this would eventually be. 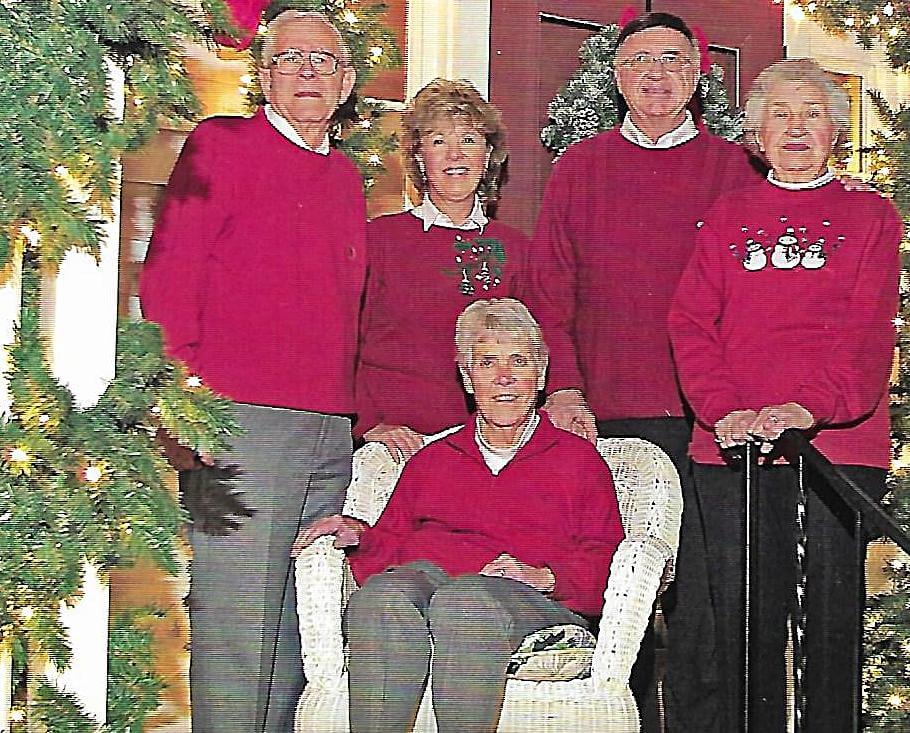 They offered to give us some money toward the cost of adding two apartments, so we sought out a prominent elder care attorney in our area who advised us on gifting and its implications if a Medicaid application would be needed for nursing home care.

I remember thinking at the time about how much harder it would be for people without the resources to hire top advisors. This is not for the faint of heart or the uninformed.

Moving in together – adjusting to a new life   Jean moved in with us in September 2003 and Marianne's mom and dad moved in with us in November. But due to typical building permit applications and approvals, everything dragged on and on over two years.

When we finally got our parents moved into their apartments, it was very nice for them. We were able to help them when needed, but still provide them independence. During the week they made their own breakfast and lunch and had dinner every night with us.   It was difficult for Ken and myself adjusting to the lack of privacy we had always enjoyed.

But we knew there was no viable alternative, so we accepted it and adjusted. When the parents first moved in with us, they were pretty self-sufficient.   My Dad and mother-in-law each got their drivers licenses transferred to New Jersey.    But it wasn't long before they couldn't do it safely any more. Ken's mother  gave her car to our oldest son who’s car had just died. Our grandchildren called it the “grammymobile” – it was an old Ford Tempo – but with very low mileage, and was still in use for several years.

Growing dependence     So this was a major adjustment for all of us.  We had to do all their errands for them. The slide toward more and more dependence accelerated. Over the last couple of years, all three of them increasingly felt less of themselves, so Marianne had to accompany them virtually everywhere – especially to their doctor visits.

They went for lab work, therapy, tests, check-ups, fittings, etc.   Marianne averaged 15-20 doctor/ dentist visits per month and she had to accompany them to most because they couldn't grasp or remember what the doctors would tell them.     Ken helped as often as he could, but it was difficult.

Marianne had a full-time job as Chief Financial Officer of our company, but she spent more time dealing with parent issues than she did at work.

So what do you do?  We constantly discussed what we should do about all of this.  What we should do next.  They were all beyond assisted living as an alternative.  And we did not want them in a nursing home.   This was tough stuff to deal with.We love our parents and felt so bad for them, but over the last couple of years we continually fought feeling bad for ourselves – no life, constant negativity at home and no escape.

We couldn't leave them for any length of time.  A one- or two-night stay away from home was a major event that required lots of planning – and worried while we were away. As difficult as it was, we handled it and kept it all together.  But then Marianne's dad fell and broke his leg – and the spiral accelerated.

A breaking point – a new direction

As with so many things in life, it takes reaching a breaking point to motivate decisive, positive action.  We decided to start a Diary Blog  to change our perspective – away from just the private storm that surrounded our family and toward helping others who are experiencing some of the same challenges we faced.

See our Elder Care Diary for our 6 year intensive caregiving experience.  It's not an easy read... but it's real... and, hopefully, you'll find some inspiration in our efforts to deal persistently and lovingly with the challenge.