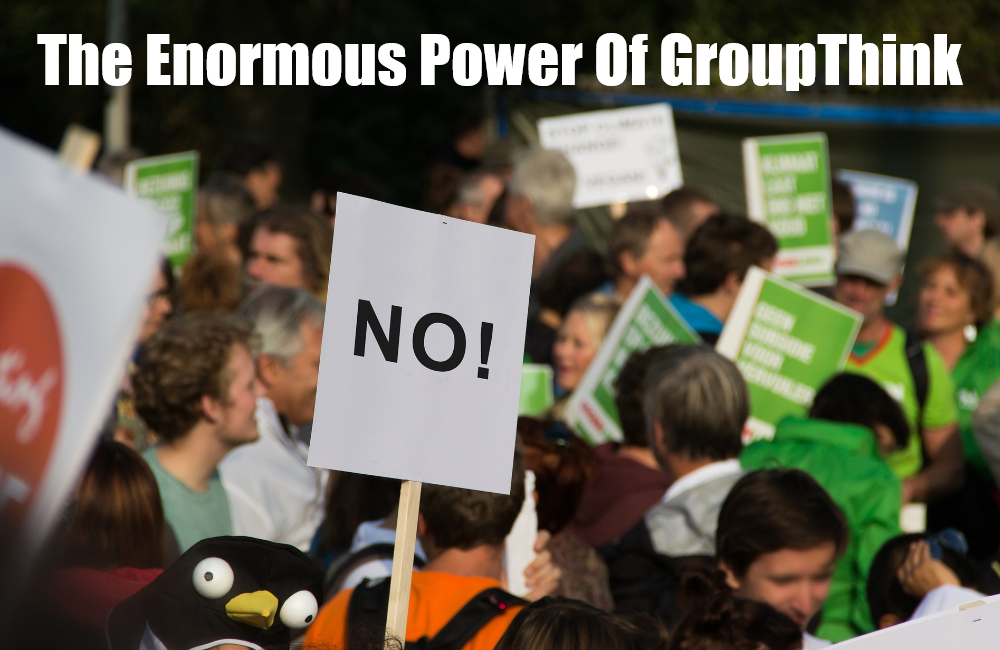 groupthink: a pattern of thought characterized by self-deception, forced manufacture of consent, and conformity to group values and ethics (Merriam-Webster)

Sounds pretty ominous, doesn’t it? The term groupthink was first coined in 1972 by Yale social psychologist Irving Janis, and was initially applied to the explanation of how groups in business tended to have an unusual level of conformity. In researching this phenomenon, social scientists began finding that the power of identifying with a group was much greater than previously understood.

In groupthink, the individuals in a group reach a consensus without critical reasoning or evaluation of the consequences or alternatives. Creativity and individuality are stifled in pursuit of a consensus. Dissenters with conflicting opinions or evidence are pressured to “come around” to the manufactured consensus – including the threat of being ostracized or censored.

When groupthink is present, critical thinking by the individual is frowned upon and suppressed to avoid conflict with the group. Ignoring facts and logic leads to irrational decision-making. Only in recent years has the extraordinary psychological power of the groupthink phenomenon been more scientifically analyzed.

Historians now look back on many of the crises in the past century where the power of groupthink played a major role in disasters or near-disasters, e.g. the Bay Of Pigs invasion, the escalation of the Vietnam war, Watergate and too many others.

How does it work?

Take the Challenger disaster... NASA personnel overrode the scientific facts presented by engineers who were experts in their fields – warning that the O-ring seals would fail in the freezing temperatures of that launch morning.

The conflicting facts were left off recommendations sent to flight managers by lower-level managers who had the information, but did not give enough weight to the risk. Those lower-level managers felt the intense pressure from above to launch that morning. Irrational decisions (and disasters) can happen when group pressures are intense.

In the car this morning listening to the BBC News Hour on NPR, there was a segment  on a major report just issued today in Great Britain severely criticizing the government for not mandating a Covid-19 lockdown sooner - costing a large number of lives.  The analysis attributed much of the WHY there was a delay to a case of "groupthink."

Scientists could not penetrate the curtain of  irrational consensus among  ministers  that the public would revolt against a mandate.  The pressures to keep the country open were intense and the science was dismissed (A lockdown less than 2 weeks later met minimal public resistance).

Just how powerful is groupthink?

In their groundbreaking book The Power Of Us, authors Jay Van Bavel and Domenic Packer explore the scientific underpinnings of the groupthink phenomenon. The book came to my attention listening to one of my favorite weekend radio programs on NPR – “The Hidden Brain” hosted by Shankar Vedantam. In a recent episode, he interviewed Dr. Van Bavel. The conversation blew my mind. Here are a few highlights:

•  Groupthink has its roots in evolutionary biology. Early humans survived by cooperating in small groups. Most people feel an innate pull toward belonging to groups. We feel a need to belong.

•  Groupthink is one of the biggest influencers of how we think. Many decisions to do something “because I want to do it” are actually filtered through the prism of group identity. Group identities often tell us what we should care about - and they tell the world who we are.

•  Groupthink tends to divide us into “us” and “the other.” Dr Van Bavel told the story of a shoe factory in Germany owned by two brothers. In 1943 in an air raid shelter, a member of one family made a remark that offended the other family. Hard feelings followed, and the brothers split up the company into two shoe factories operating in the same town. Townspeople divided into two camps – each passionately supporting one of the brothers.

The town became known as “The town of bent necks” as townspeople walked with their heads down checking out what shoes other people were wearing. Fraternizing with, dating or marrying someone in the other camp was sinful. Upon their deaths, the brothers insisted on being buried on opposite sides of the town cemetery. Those two shoe factories grew into what today are still bitter rivals – Adidas and Puma.

Signals of group membership, like what sneakers we wear, what team logo is on our shirt or hat, what uniform we wear, etc. identify us as group members, often passionate about our group identity.

•  The disturbing part of this is that, increasingly, these “in-group” identities lead to polarization linked to “out-group” disparagement and even hate. Social media and other mass communication has brought the world closer together in some ways, but it has also enabled and energized the formation of online “tribes” who today more easily share and amplify not only positive news and information, but also biased, inaccurate, emotionally charged information about out-group “others.”

Facts, science, truth, conflicting opinions – they’re dismissed as irrelevant. Those who introduce anything that conflicts with the groupthink are disparaged. Thanksgiving dinners in the US are, on average, 1/2 hour shorter than a few years ago – out-group family members don’t stick around for the dessert. There are actually dating websites now that are dedicated to political preference.

Some of these conflicts seem absurd.

But to the individual group member, they are deeply personal. In this groupthink-charged environment, we don’t just disagree with people on the outside. People on the outside are inherently evil, untrustworthy, even unworthy. Groupthink is a spectrum... from healthy disagreements or even fun competition between loyal sports fans... to where America, and indeed the world, is barreling toward groupthink extremes that endanger democracy itself.

It is difficult to see answers on the horizon for complex social and political issues.

Everyone thought body cams would make assigning responsibility in police/citizen encounters easier. But the reality is that two people looking at the same exact video footage will assign blame depending on the biases of the group they identify with – pro-police or pro-victims. Republicans see the pandemic, and indeed everything, differently than Democrats.

Social media makes tribal loyalties and group divisions deeper. 4 billion people use social media worldwide. An average user scrolls through 300’ of news feed in a day – scrolling down 600 times daily – scanning quickly to see what catches their attention. – sharing almost exclusively with members of their own group. There is little interaction with “others” except scorn and disparagement.

The biggest single predictor of something going viral is “dunking” on the out-group – 67% more likely to be shared. This is the language that WORKS on social media. And fact-checking doesn’t work at the extremes. Group identity overpowers facts.

So what do we do about all this?

We seem to be spiraling downward toward a more cruel, self-absorbed, self-serving and more contentious “us” vs “them” world.

Countering the threats of groupthink extremes, there is the challenge to make group identity more constructive and productive. We need individuals to step up and lead groups toward loftier purpose.

How can we harness group identities to solve important challenges in our societies? How can we reshape and reinvent those identities to change outcomes we would like to see in the world? How do we build bridges?

The sub-headline of Dr. Van Bavel’s book is “Harnessing Our Shared Identities to Improve Performance, Increase Cooperation, and Promote Social Harmony.” Overcoming the power of groupthink, and mobilizing group identity to solve important challenges in the world, begins with a change in focus.

Time and again humanity has proven that it can overcome differences, even extreme differences, to achieve meaningful progress for the collective good. What is the singular common thread pulling disparate groups and individuals together - from world wars to defeat tyranny to philanthropic drives to address hunger, disease and poverty to broad-based volunteering in times of disaster?

In stressful times throughout history, the bonding thread is a common sense of emotionally driven purpose to reach a noble goal... “we were thrown in this cauldron together” is the unifying theme. In stressful times we must feel a sense of emotionally shared purpose to escape, overcome, climb out, fight back, protect... provide hope, share our privileges and blessings with those less fortunate, educate our youth, support our parents and grandparents, be productive citizens. Being part of a team sharing a positive purpose... even when gaps seem unbridgeable... that is the most consequential path to a future I want to see for my children and grandchildren.

The secret is to have the shared purpose as emotionally engaging as possible.

Politicians would be so much better off keeping the focus on what their policies can do to make the lives of people better rather than getting lost in and arguing numbers and blame.

• Liverpool soccer fans spontaneously singing together to support a Muslim player who was fouled and injured...leading to a decrease of anti-immigrant activity in the community

Politicians, government leaders, fund-raisers, community organizers, team managers, business leaders – anyone who feels a calling to build bridges and mobilize for good in the world – should start by identifying a noble purpose and then share that purpose with others. Don’t be intimidated by pushback. Any group worth belonging to finds room, sometimes reluctantly or even belligerently, for ideas that better the lives of the people in the group, as well as the lives of a broader public.

And if evil threatens to prevail, resist. Be brave. Organize. Banding together to form resistance groups to fight tyranny mobilizes the power of group identity for GOOD. Start small. Movements don’t begin fully formed. It takes individuals with the courage to resist intense pressures, and the motivation to make things better, to challenge and overcome groupthink. I'm not naive.  This ain't easy.  But it's essential.

We are in this cauldron together.