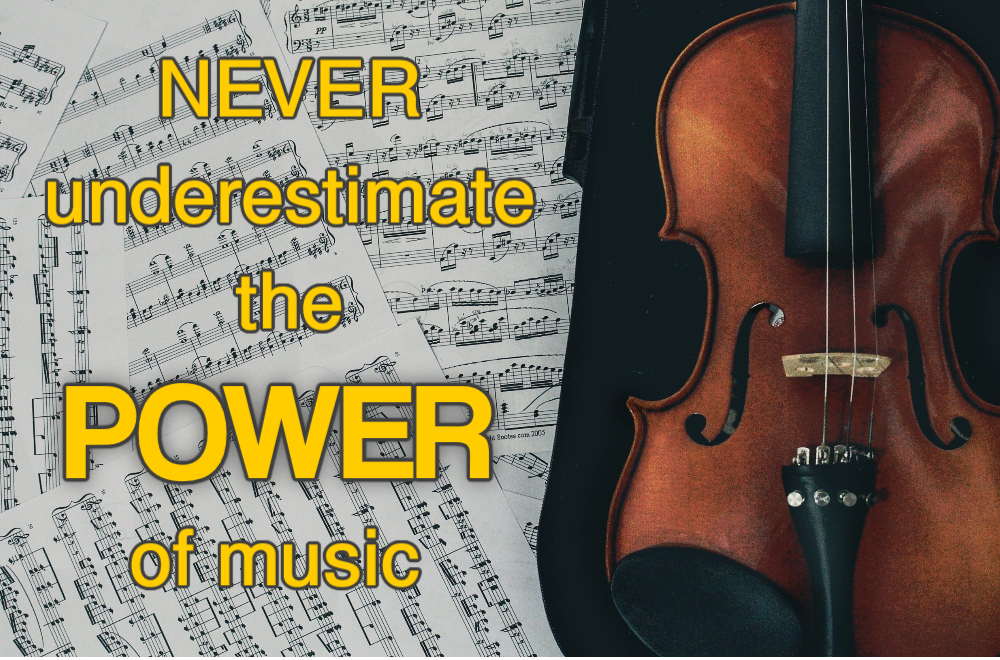 I love music! Most humans do to varying degrees. I feel the power of music in my life every day. I don’t know why it moves me. It just does.

I played the accordion (don’t snicker) beginning at age 10. I actually started teaching accordion at age 17 while I was in high school. I love to play the piano, and I’m one of the lucky people who can play without sheet music - just by hearing a melody.

Playing music relaxes me. Why is that? I also love listening to music. Like most people I like some forms of music and others not so much. I’m a huge Broadway music fan. I love choirs. I love romantic music with lots of strings. I love John Williams (I still tear up when I listen to the theme from Schindler’s List).

I like a little bit of country – too much sounds repetitive and I just tune out. I don’t understand jazz, and I hate that I’m not sophisticated enough to “get it.” Some pop music (a limited sampling) is magical. Heavy metal hurts my ears and my brain. Not into rap.

Why is the power of music almost universally felt by humans?

So why are we, as humans, almost universally pulled toward music? And, even more significantly for us aging folk, why is music important as we age? Is there a scientific basis for the powerful effects music has on our aging lives?

The answer appears to be a resounding YES. There are many scientific studies and science-based articles on this issue because the issue is so relevant to the lives of so many of us.

In a recent article from Johns Hopkins Medicine entitled “Keep Your Brain Young With Music,” one otolaryngologist says that there are few things that stimulate the brain the way music does – “If you want to keep your brain engaged throughout the aging process, listening to or playing music is a great tool. It provides a total brain workout.”

Researchers have found that listening to music can reduce anxiety, blood pressure and pain, as well as improve sleep quality, mood, mental alertness and memory.

Studies at Johns Hopkins where musicians improvised music while inside an MRI concluded that the amount of computing a brain must do playing or listening to music is substantial. Music is mathematical. It has structure. It’s architectural. The brain is challenged to perceive relationships between notes to understand them. There’s a lot of brainpower stimulated by music. It truly is a total brain workout.

The power of music as we age...

In a study where older adults took piano lessons, their attention, memory and problem-solving abilities showed improvement. In addition, they saw improvements in their moods and their quality of life. And you don’t have to become a pro. Just taking a few lessons made a big difference. The incredible power of music as we age has been documented over and over again.

Researchers also found that challenging yourself to listen to forms of music beyond what you like, or are familiar with, stimulates the brain to struggle to understand the music. I guess I have to try harder listening to jazz, country and rap. I never thought of it as brain exercise, but I guess it’s actually good for me. Who knew?!

In her book “The Power Of Music: Pioneering Discoveries In The New Science Of Song,” author Elena Mannes writes about a broad host of studies about the substantial effects music can have on the brain… about the profound relationship that humans have with music over a life span… about the remarkable fact that music stimulates more parts of the brain than any other human function. Just some of the findings that she chronicles in the book include:

•   Music has the potential to help people with neurological deficits – like stimulating verbal function in a stroke patient.

•   Melodic intonation therapy uses music to stimulate portions of the brain to take over for those that are damaged, enabling patients to regain the ability to speak.

•   Because music associates with memories, music can be helpful in treating Alzheimer's patients.

… and there are many more.

Bottom line – music is a treasure for humanity, and a therapeutic medicine for those of us who are age-challenged. Living an ageless life is enhanced by the power of music, in all its forms, to stimulate, challenge, soothe and entertain our aging brain.

Embrace music. It is truly a treasure… a gift. Music is an engaging, stimulating companion in our journey to an ever-ageless, ever-aspiring life.

Here’s an informative collection of  TED Talks on the Power Of Music.