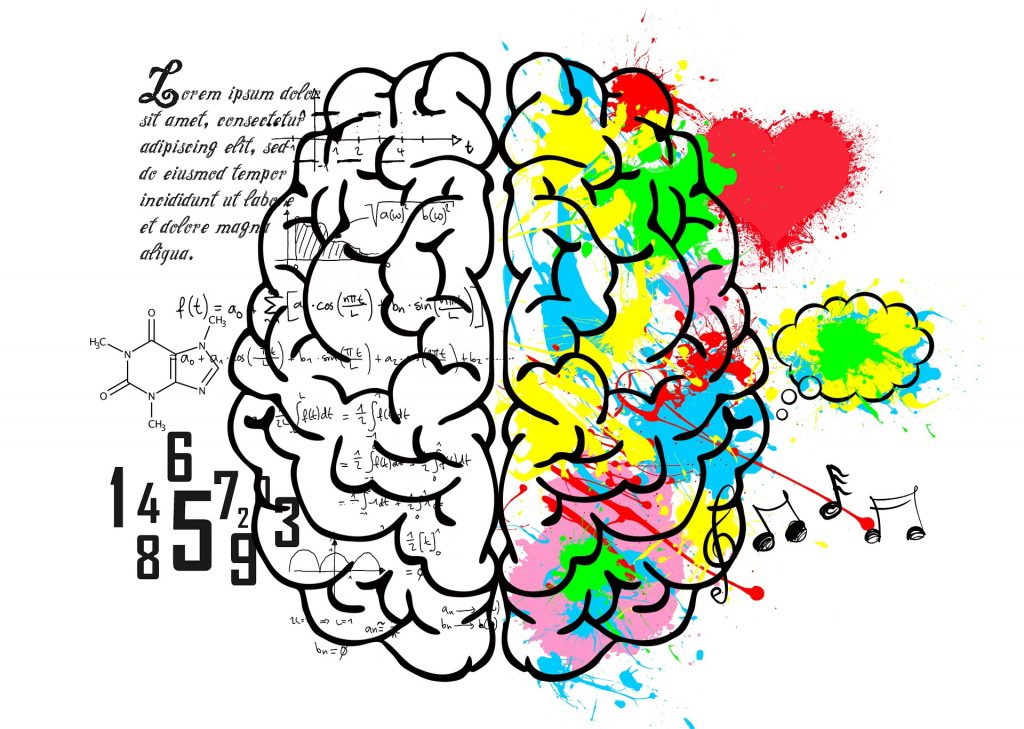 “The rational mind is a faithful servant.  The intuitive mind is a precious gift.”

Left brain people like order.  They like facts. They are more logical and analytical.  They tend to be better at mathematics, reading and writing.  Their thinking is linear.  They think in words.

Right brain people are more holistic thinkers, more imaginative, more non-verbal and intuitive.  Organization is not a priority.  They are likely to be more visual, more creative.  They’re attracted to the arts.  They’re daydreamers.

People are either left-brained or they are right-brained. One hemisphere or the other is dominant.  That’s the common perception.

In this post I explore a different and controversial point of view.  The generally accepted portrait of the human brain that you see in pop science, motivational speaking and in most imagery depicting this relationship between the hemispheres (like the illustration at the top of this post) is simplistic and more focused on WHAT the brain does rather than on HOW it does it.

A different point of view

The common left brain right brain perception has been challenged by the extraordinary research of one of the world’s most prominent thinkers about the complexities of the human brain  - psychiatrist Iain McGilchrist.

His extensive research and analysis reveals a different relationship between our “two brains.”  McGilchrest argues that both halves of the brain are actually fully functioning “wholes” – connected by a “superhighway” of neurons, the corpus colosum,  that enables sharing between the two halves – synthesizing the contributions of both halves to thoughts and decision-making as we make our way through life.  The problem is that, while both sides have coherent, fully-functioning wholes, the two sides have incompatible ways of experiencing the world.

The real difference is not in what they each do.

Both hemispheres are involved in doing everything - both sides are essential.  The real difference is in HOW THEY DO THE SAME THINGS  DIFFERENTLY – each side with a different spirit and focused on a different end - producing  two different views of reality.

It’s like each half of the brain is a separate whole person – each with a different point of view and purpose.  They must work together to succeed and find fulfillment in the modern world, but they’re inevitably in conflict.  To accomplish anything of importance, rather than wallow in confusion and inaction, one side must be the master.

The left side is oriented toward granular details, systems and models.

It loves seeing tasks reduced to 6 easy steps.  It loves summaries. It loves Cliff Notes.  It prefers mechanisms to living things. It’s constantly focused on getting to the next step in its linear goal path.  It sees what is right in front of it - a narrow view of the world.  Self-interest is at the core of decision-making.  Empathy is a weakness.  It doesn’t see the value of what the right side brings to living a life.

The left side gets easily frustrated, dismissive, wants to express strong denial, even anger, when it experiences other points of view, objections or obstacles in its way toward getting to the next step in its immediate narrow task.  It’s my way or the highway.  An open mind is wasted effort.

The right side is more flexible.

Its view of the world is broader and more generous. It sees nuance.  It sees the big picture.  It sees “everything.”

It also, unlike the left brain, has the wisdom to see the essential value of the other half of the brain. In McGilchrest’s view, the right brain has the role of the wise, all-seeing Master, and the left brain is the diligent, faithful Emissary dispatched to get stuff done.

In his follow up book The Master And His Emissary…

McGilchrist argues that the tension between these two inner worlds of perception has been growing, and that the left-brain view of the world has been ascending in dominance since the industrialization of the Western world has accelerated – with potentially profound consequences for society, history and culture.

Increasing polarization… a dismissive and pervasive “I’m right – you’re wrong” attitude… lack of empathy for others, their circumstances or point of view… intense frustration with anyone who expresses a different opinion… growing anger with and denial of others’ rights that do not agree with our values… a focus on step-by-step details rather than on holistic thinking.

We in the West are listening more to what the Emissary is telling us, the left brain…

We are not listening to the much wiser, all-seeing right brain Master.  The left brain cannot understand metaphors, connotations, imagery, subtlety… even has a hard time with humor.  It cannot see the value of what history teaches.   It can’t deal with anything moving – like today’s rapid-pace world –  without confusion, frustration and anxiety.  It needs everything to be static so it’s easier to grasp.  All goals are short-term.

The left reduces moral questions to arithmetic.  Music is the sum of its notes instead of a more profound whole.

The left brain considers its narrow view of the world all it has to see. The right sees the big picture, analyzes it and marshals diverse resources to address the task – a talent the left brain does not know it doesn’t have – even though it has achieved a level of dominance today that it does not deserve, and does not serve the whole person well.

So what can we do about all of this?

We see the consequences in today’s politics, social media, family dynamics, management/employee conflicts and business-to-business relationships.  And what does this discussion have to do with living an ageless life?

The critical first step is AWARENESS.

Just recognizing and seeing some of these attributes in ourselves, in the people around us, in the information we consume online, on TV or on social media can help us see our world more through the eyes of the wiser right brain Master.  This is not about being judgmental of others.  It’s about optimizing the core humanistic traits of a healthy, fulfilled life – empathy, patience, charity, humor, balance and love.

And, as far as living an ageless life is concerned, my contention is that we cannot live a truly ageless, ever-aspiring life unless we find our way to a balanced left brain right brain cooperation – managed by the innate wisdom of our right brain Master. We must not allow the left brain’s selfish, unempathetic, short-term, narrowly focused, angry view of life dominate.

An ageless life reflects the best of us.

Our task is to consciously help our right brain Master guide us on our journey and continually grow its innate ability to see and encourage the best in us every day.

We each deserve no less.

I enthusiastically suggest that you check out McGilchrist’s two books on this topic.  They are a stimulating, thought-provoking read.

Here’s a link to a podcast that was broadcast on National Public Radio’s The Hidden Brain “One Head – Two Brains” in which the host discusses with the author his latest book.  That NPR show was the source of my initial curiosity about this topic, and my interest in McGilchrist’s work.

Join our EverAgeless communityto receive other thought-provoking posts every week.